Registration closes May 31st, confirmed participants will be notified by the end of June 2018

We intend to host the 15th Potsdam Thinkshop in 2018, with a focus on understanding the role of feedback in galaxy formation. We plan to cover all subjects directly related to feedback including stellar and active galactic nuclei feedback, interstellar medium, circumgalactic medium, mechanical feedback, magnetic fields and cosmic rays, radiative feedback, etc. from both an observational and theoretical point of view.

Pease join us at #thinkshop2018 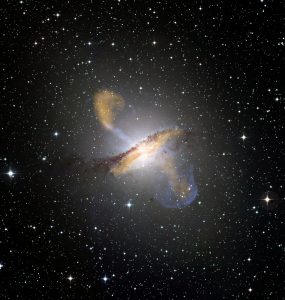 Galaxies come in various shapes and sizes ranging from spirals to ellipticals – which processes are mainly responsible for their appearance? How do transformative processes affect the characteristics of galaxies? Observations indicate that the mass of a galaxy is a discriminating factor in its ability to effectively turn gas into stars. But why are galaxies like our own Milky Way apparently the most efficient in producing stars, while dwarf galaxies and galaxy clusters struggle? Is “feedback” the answer? and if so, what is the underlying physics? Or do we need to go beyond Occams razor and add additional interactions to otherwise cold dark matter?

The number of observational studies of galaxies is rapidly increasing as a consequence of new techniques such as integral field spectroscopy, and major improvements at radio, optical, infrared, ultraviolet, X-ray, and gamma-ray frequencies. These observations over the entire electro-magnetic spectrum have allowed astronomers to spatially resolve internal properties of galaxies with unprecedented detail, and are thus providing key insights towards understanding the structural components of galaxies, their star-formation activity, kinematics, stellar populations, metal distribution, and nuclear activity, as well as how galaxies evolve with time. They provide important clues of how cold gas accretes from the circumgalactic medium, collects in the disk, is converted into stars and returned to the cosmic cycle of baryons.

These endeavors are complemented by the latest generation of galaxy simulations that are pushing forward higher-resolution, more realistic galaxies with many physical processes included, that trace galaxy evolution following the hierarchical LCDM scenario but also model the multi-scale physics of the interstellar medium to unprecedented detail.

The aim of the 15th AIP Thinkshop is to bring together leading international experts and students working in both Galactic and extragalactic astronomy. We aim to discuss the different components of a galaxy (stars, gas, non-thermal components, dust, and dark matter), and where these components are found within and around galaxies, from both an observational and a theoretical point of view, with the final objective of getting a better understanding on the feedback processes that rule the evolution of galaxies.

* Physical properties of gaseous halos and imprints of feedback on them

* Circulation of metals and gas in and out of galaxies

* Feedback via cosmic rays and radiation