The conference venue is located in the Science Park »Albert Einstein« on the Telegrafenberg. Between 1832 and 1849, a station of an optical telegraph line was placed here. Beginning in the late 1870-ies, several observatories were built here, including the »Great Refractor« (1899). In 1924, the solar observatory »Einstein Tower« became operational. The meeting itself will take place in the lecture theater (Haus H, lower left image). 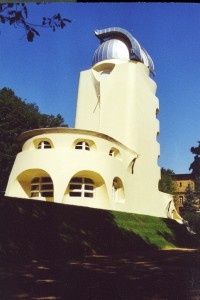 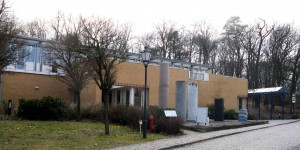 Berlin and Potsdam are served by an excellent public transportation system. The website of the public transport authority VBB (Verkehrsverbund Berlin-Brandenburg) is extremely useful to help you plan your journey. Network maps for Potsdam and Berlin in pdf.

The meeting venue Telegraphenberg is accessible by Bus 691 from Potsdam Hauptbahnhof/Hbf (Main station). Bus 691 schedule in pdf. The venue is the final stop, about 1 km, south of the main station.

Berlin and Potsdam are divided into 3 fare zones (A, B and C). The ticket must include all the zones through which the journey is carried out.  A ticket can be used on buses, trams, S-Bahn, and Regional trains as long as it is valid within the fare zone. To travel from Berlin Hauptbahnhof/Hbf (Main station) to Potsdam, one requires a Berlin ABC ticket, while travelling only within the greater/inner Potsdam area, a Potsdam AB ticket is sufficient. Tickets can be purchased from vending machines at S-Bahn stations, in buses, and trams. All tickets must be validated before starting the journey, which can be done at the validation box close/next to the ticket machine and can be identified by an arrow/triangle symbol.

Tegel Airport: The easiest way to reach Potsdam from Tegel is to take a metro bus outside Terminal A/B. Bus X9 goes to Zoologischer Garten and then with the S-Bahn S7 one can reach Potsdam Hbf. Alternatively, one can take Bus 109 and get down at Kaiser-Friederich strasse/Kantstrasse and alight the S7 at Charlottenburg to Potsdam Hbf.

Schoenefeld Airport: There are number of ways to reach Potsdam from Schoenefeld airport depending on the time of your arrival. Please consult the VBB online service and the network map provided above to plan your journey.

Taxi fares from either airport to Potsdam are between 55-60 euros on the meter.

Additional hotels and tourist information can be found on the web pages of the City of Potsdam.